skip to main | skip to sidebar

Cucurbita is a genus in the gourd family Cucurbitaceae KADDU 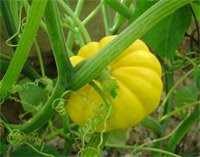 Cucurbita is a genus in the gourd family Cucurbitaceae first cultivated in the Americas and now used in many parts of the world . It includes species grown for their fruit and edible seeds (the squashes, pumpkins and marrows, and the chilacayote), as well as some species grown only as gourds. They have bicollateral vascular bundles. Many North and Central American species are visited by specialist pollinators in the apid group Eucerini, especially the genera Peponapis and Xenoglossa, and these bees can be very important for fruit set.

Cucurbita species are used as food plants by the larvae of some Lepidoptera species including Cabbage Moth, Hypercompe indecisa and Turnip Moth.

Labels: Cucurbita is a genus in the gourd family Cucurbitaceae